Wolves in the Tower of London and an elephant so well trained that Lord Byron wanted to adopt him as a butler – Martin Fone uncovers the weird and terrifying history of London’s last menagerie and how they helped establish what we would recognize today as its first zoos.

Founded in April 1826, the Zoological Society of London realized the dream of Sir Stamford Raffles, Humphry Davy and Joseph Banks, to create a zoological collection which would not only “interest and amuse the public”, but would also rival that of the Jardin des Plantes. in Paris. Land was purchased from the Crown in Regent’s Park, animal shelters were built, and on 27 April 1828 the present ZSL London Zoo opened to society members. It’s the oldest scientific zoo in the world, but curiously the public wasn’t allowed to enter until 1847, with their ticket money a welcome boost to the Society’s depleted funds.

For centuries, keeping exotic animals, often given as diplomatic gifts, has been the preserve of royalty. In 1110, King Henry I built a seven-mile-long wall at the royal park at Woodstock in Oxfordshire to enclose a collection of lions, camels and porcupines, possibly England’s first zoo. The animals were not bred to satisfy any scientific interest, but to spice up the king’s passion for hunting.

A gift of three lions from Holy Roman Emperor Frederick II in 1235 led Henry III to create his own menagerie, which included a polar bear, allowed to fish in the Thames, and, in 1255, a animal which the contemporary chronicler, Matthew Paris, describes as “a rough-skinned animal that eats and drinks with its trunk”. In the 1270s, Edward I had built the Lion Tower, at the entrance to the Tower of London, to house the growing menagerie.

The 13th century Royal Menagerie at the Tower of London as it appeared in 1820.

Keeping elephants was problematic as they were thought to be carnivorous, whereas in 1623 James I was advised to feed his own on a diet of wine between the months of September and April. This woeful ignorance of their dietary needs, coupled with cramped living conditions and the extremes of the English climate, meant that most animals were doomed to short and miserable lives.

The public first had access to the menagerie during the reign of Elizabeth I. Admission was free if accompanied by cats or dogs, which were collected and fed to carnivores. Visitors were advised “not to get too close to the dens and to avoid any attempt to play with” the animals, sound advice that was not always followed. On February 8, 1686, Mary Jenkinson was brutally killed after patting a lion’s paw.

When Alfred Cops was appointed chief keeper in 1822, only a handful of animals remained of the collection, but within six years he had built up the stock of some 300 animals, representing some 60 species, and improved their living conditions. A successful breeding program led one commentator to observe that “those whelped in the Tower are fiercer than those taken from the wild”.

Despite the success of the cops, accidents and escapes dogged the menagerie. Wolves broke into a caretaker’s apartment, causing his wife and children to flee for their lives, a secretary bird stuck his head in a hyena’s enclosure, and a battle royale between two tigers and a lion, accidentally left in the same cage, resulted in the death of the lion. With the new Regent’s Park Zoo offering alternative accommodation, the government, tired of the problems with the menagerie, moved many animals there.

The cops, however, were allowed to exhibit their own animals there, but even then misfortune followed, leading authorities to close the menagerie after a daring attack by a monkey on a guard. On August 28, 1835, the public was admitted for the last time. Soon after, the remaining animals were sold to an American showman, Benjamin Franklin Brown, and the Lion Tower was demolished.

The cops weren’t the only contractor satisfying the public’s desire to see exotic animals. London’s weirdest menagerie was founded by the Pidcock family in 1773 on the rickety floor of the Essex Exchange on the north side of the Strand, initially as winter quarters for the animals in their traveling circus. It quickly became a popular tourist attraction. 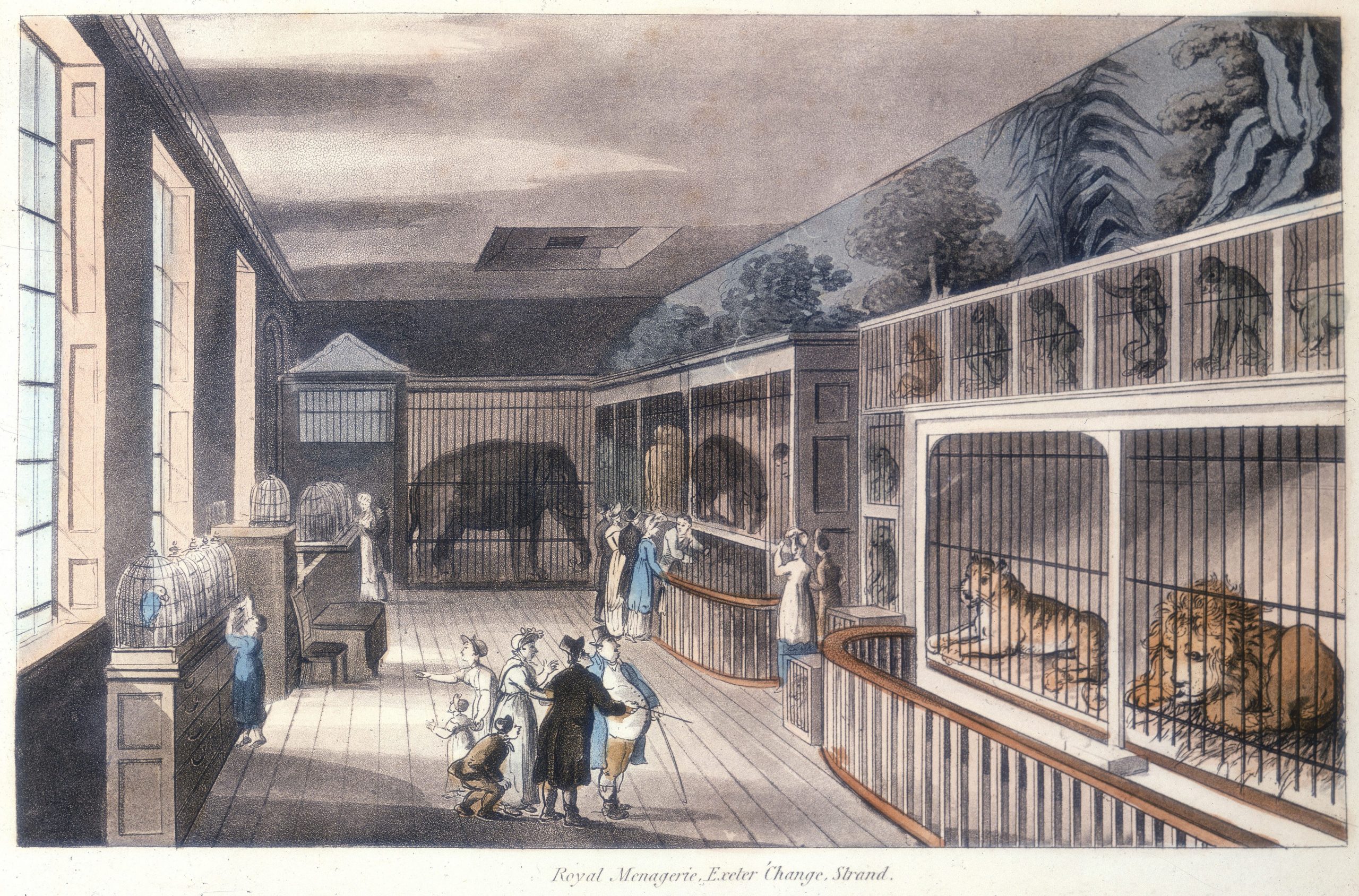 The Royal Menagerie at Exeter Change, The Strand, London, c1820. Animals in the cramped cages include an elephant, lion, tiger, monkeys/monkeys and parrots. In the background, a caretaker presents exhibits to visitors, while in the foreground, a family party looks around. Aquatint after Thomas Rowlandson (1756-1827).

The room was decorated with exotically painted landscapes and caged dens housed the animals, which included lions, tigers, jaguars, tapirs and, to test the strength of the floorboards to the max, several pachyderms. Higher up the walls were enclosures for birds and monkeys. The roars of animals could be heard in the Strand, often startling passing horses.

Edward Landseer painted some of the animals while Lord Byron was charmed by the menagerie elephant, Chunee. He “took and gave me back my money”, he noted in his diary for November 14, 1813, “took off my hat – opened a door – pulled a whip – and behaved so well that I wish he was my butler.” While the panther, he said, was “the most beautiful animal on earth”, the “poor antelopes were dead”.

Renamed the Royal Grand National Menagerie when Edward Cross acquired it in 1814, guests were greeted by a doorman dressed as a Yeoman of the Guard, a clear nod to the rival Tower establishment. Chunee, the star attraction, took up residence in 1809, regularly parading through the streets and appearing on stage, completing a forty-night stint at the Theater Royal, Haymarket.

Unfortunately, on February 26, 1826, it all turned out to be too much, and Chunee attacked and killed her caretaker. It took three days, a civilian firing squad, soldiers from Somerset House, a small cannon and 152 rounds of ammunition to get him out of his misery. 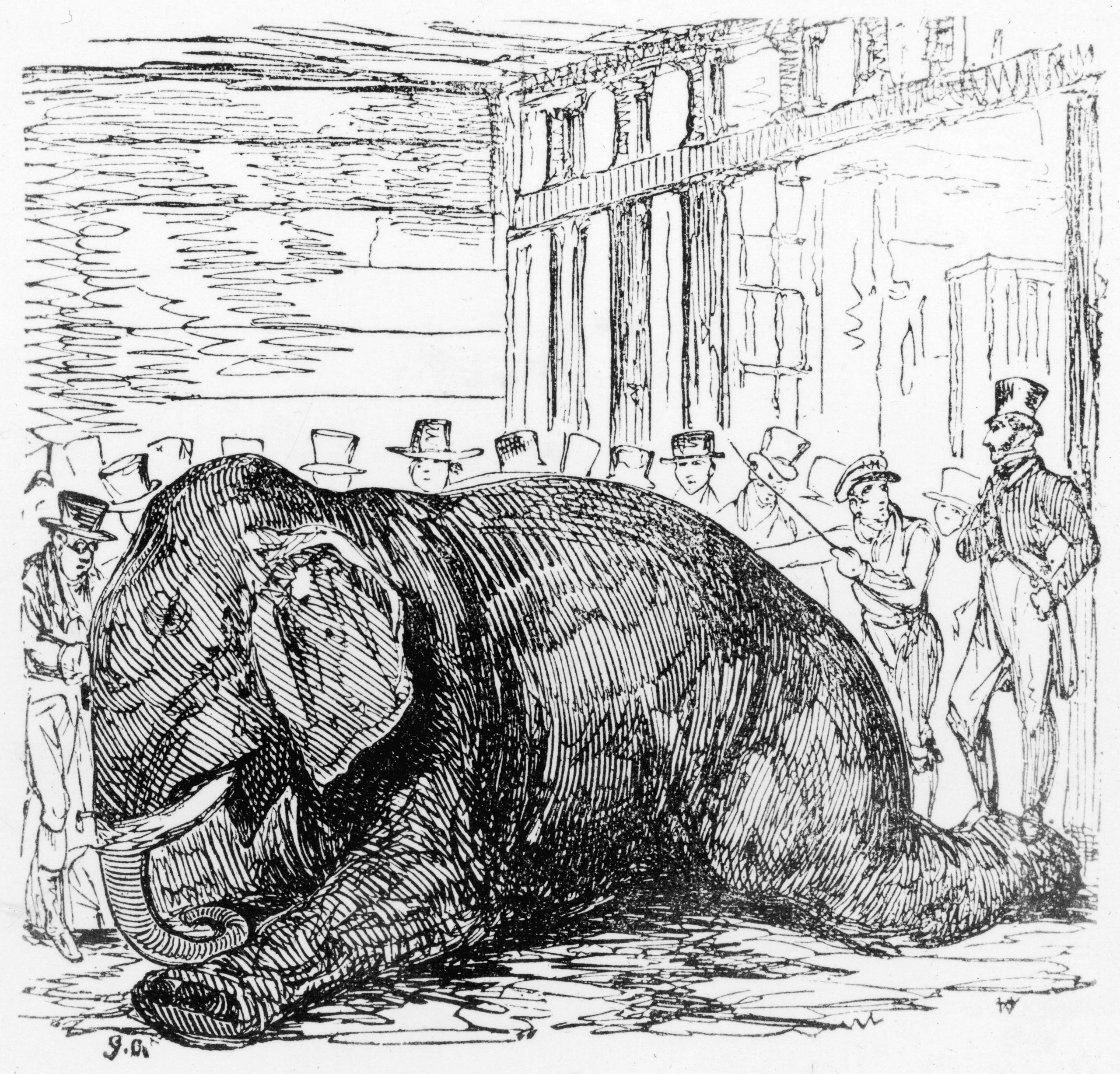 Chunee’s disappearance caused public outrage, attendance plummeted and, to add to Cross’ woes, as part of the redevelopment of the Strand, the Essex Exchange was demolished in 1829. He moved his menagerie to King’s Mews, now the site of the National Gallery. , before selling some animals to London Zoo.

Some have therefore been part of the London Zoo collection, but not all. The remaining animals were sold in 1831 for £3,500 to the Surrey Literary, Scientific, and Zoological Society, which Cross himself had founded.

Under his direction, the Society established Surrey Gardens on eighteen acres of parkland at Walworth. It boasted walks, spectacular gardens, laid out by Henry Phillips, fireworks, hot air balloon rides and historical re-enactments including the eruption of Vesuvius and the Great Fire of London.

At its height, more than 8,000 people attended a day, happy to pay their admission in shillings. Queen Victoria, Prince Albert and their children visited in 1848. 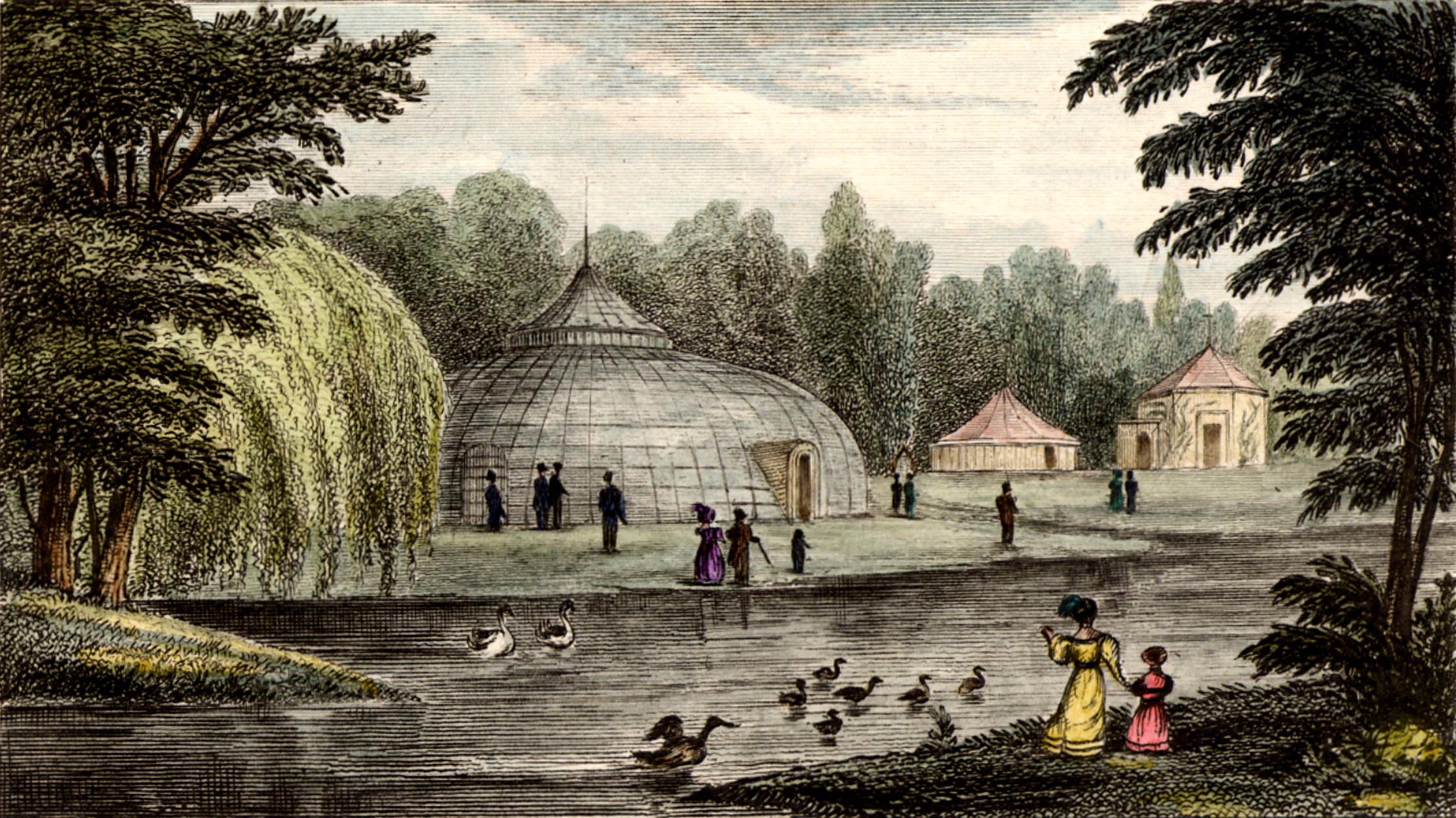 Surrey Zoological Gardens, Walworth, London. Engraving after drawing by Thomas Hosmer Shepherd. The conservatory was 300 feet in circumference, containing over 6,000 square feet of glass, and at the time it was the largest glass building in England.

The main attraction, however, was its zoo, which in its pomp housed 170 species. At its center was a large circular glass-domed veranda, a precursor to the Crystal Palace, in which exotic fish, birds and animals were displayed. Feeding time was a particular attraction, and the keepers did not hesitate to tease the animals to ensure “a good show”.

It was also the home of five giraffes, the first to be publicly displayed in Britain, which were transported from Africa in 1843 and walked from the docks to Walworth at night so residents would not be disturbed by “those strange horses.

Cross’s death in 1854 precipitated the end of the Garden. The animals were sold in 1855 to fund a 12,000-seat music hall that burned down six years later, and property developers bought the park in 1877. The animals’ ghostly cries, it is said, can still be heard today. 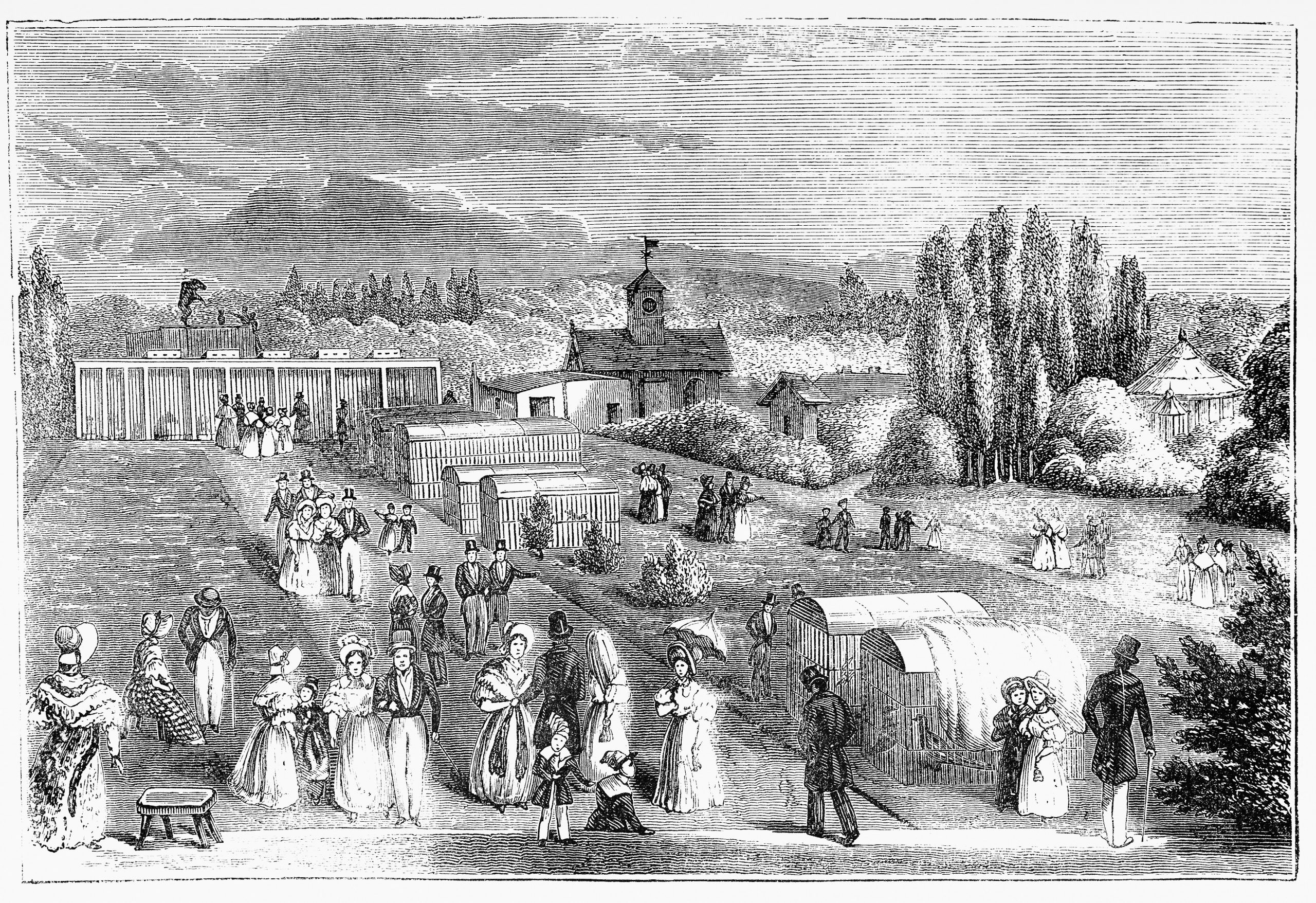 London Zoo, the oldest scientific zoo in the world.

“Once the BBC was filming here and the penguins were dismantling the equipment and running away with it, always

ZSL London Zoo is once again open to the public. Eleanor Doughty was the first through the doors to greet

Over the centuries, Britain has dominated the world in everything civilized, from culture to condiments and fast horses.

Always associated with sin, these elongated reptiles are misunderstood contributors to our ecosystem, says Annemarie Munro.

Synopsis of the story: Pride of Baghdad A pride of lions escapes the Baghdad Zoo and finds freedom can cost a lot in this week’s Comic Rewind, Pride of Baghdad. In the city of Baghdad, a pride of four lions lived in the zoo. Zill, Safa and young Ali were happy to live in captivity […]

An orangutan training for a hand injectionPhoto: YouTube screenshot of the Cincinnati Zoo As the United States has failed to meet President Biden’s goal of vaccinating 70% of its human population against COVID-19 by July 4, the Cincinnati Zoo and Botanical Garden is preparing to launch its own program vaccination – but this time it’s […]